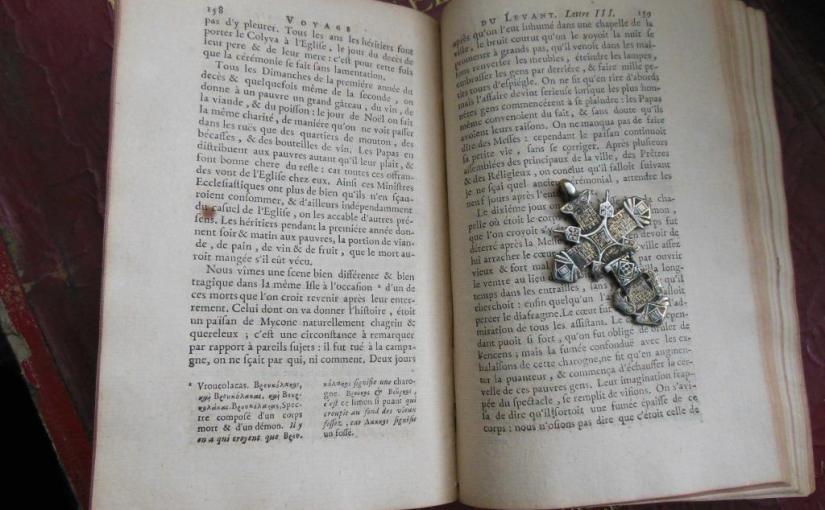 We were present at a very different Scene, and one very barbarous, in the same Island, which happened upon occasion of one of those Corpses, which they fancy come to life again after their interment. The Man whose Story we are going to relate, was a Peasant of Mycone, naturally ill-natur’d and quarrelsom; this is a Circumstance to be taken notice of in such cases: he was murder’d in the fields, no body knew how, or by whom.

Two days after his being bury’d in a Chapel in the Town it was nois’d about that he was seen to walk in the night with great haste, that he tumbled about Peoples Goods, put out their Lamps, griped them behind and a thousand other monky Tricks. At first the Story was receiv’d with Laughter; but the thing was look’d upon to be Serious, when the better sort of People began to complain of it; the Papas [Orthodox priests] themselves gave credit to the Fact, and no doubt had their reasons for so doing; Masses must be said, to be sure: but for all this, the Peasant drove his old trade, and heeded nothing they could do. After diverse meetings of the chief People of the City, or Priests and Monks, it was gravely concluded, that ‘twas necessary, in consequence of some musty Ceremonial, to wait till nine days after the Interment should be expired.

On the tenth day they said one Mass in the Chapel where the Body was laid, in order to drive out the Demon which they imagin’d was got into it. After Mass, they took up the Body, and got every thing ready for pulling out its Heart. The Butcher of the Town, an old clumsy Fellow, first opens the Belly instead of the Breast: he groped a long while among the Entrails, but could not find what he look’d for; at last somebody told him he should cut up the Diaphragm. The Heart was pull’d out, to the admiration of all the Spectators. In the mean time, the Corpse stunk so abominably, that they were obliged to burn Frankincense; but this smoke mixing with the Exhalations from the Carcass, increas’d the Stink, and began to muddle the poor Peoples Pericranies. Their Imagination, struck with the Spectacle before them, grew full of Visions. It came into their noddles, that a thick Smoke arose out of the Body; we durst not say it was the Smoke of the Incense. They were incessantly bawling out Vroucalacas, in the Chapel and Place before it: this is the name they give to these pretended Redivivi. The Noise bellow’d through the streets, and it seem’d to be a Name invented on purpose to rend the Roof of the Chapel. Several there present averr’d, that the Wretch’s Blood was extremely red: the Butcher swore the Body was still warm; whence they concluded, that the Deceas’d was a very ill Man for not being thorowly dead, or in plain terms for suffering himself to be re-animated by Old Nick; which is the notion they have of a Vroucolacas. They then roared out that Name in a stupendous manner. Just at this time came in a Flock of People, loudly protesting they plainly perceived the Body was not grown stiff, when it was carry’d from the Fields to Church to be bury’d, and that consequently it was a true Vroucolacas; which word was still the Burden of the Song.

I don’t doubt they would have sworn it did not stink, had we not been there; so amazed were the poor People with this Disaster, and so infatuated with their Notion of the Dead’s being re-animated. As for us who got as close to the Corpse as we could, that we might be more exact in our observations, we were almost poison’d with the intolerable Stink that issu’d from it. When they ask’d us what we thought of this Body, we told them we believed it to be very thorowly dead: but as we were willing to cure, or at least not to exasperate their prejudiced Imaginations, we represented to them, that it was no wonder the Butcher should feel a little Warmth when he grop’d among the Entrails that were then rotting; that it was no extraordinary thing for it to emit Fumes, since Dung turn’d up will do the same; that as for the pretended Redness of the Blood, it still appear’d by the Butcher’s Hands to be nothing but a very stinking nasty Smear.

After all our Reasons, they were of opinion it would be their wisest course to burn the dead Man’s Heart on the Sea-shore: but this execution did not make him a bit more tractable; he went on with his racket more furiously than ever: he was accus’d of beating Folks in the night, breaking down Doors, and even Roofs of Houses; clattering Windows; tearing Clothes; emptying Bottles and Vessels. ‘Twas a most thirsty Devil! I believe he did not spare any body but the Consul in whose House we lodg’d. Nothing could be more miserable than the Condition of this Island; all the Inhabitants seem’d frighted out of their senses; the wisest among them were stricken like the rest: ‘twas an Epidemical Disease of the Brain, as dangerous and infectious as the Madness of Dogs. Whole Families quitted their Houses, and brought their Tent-Beds from the farthest parts of Town into the publick Place, there to spend the night. They were every instant complaining of some new Insult; nothing was to be heard but Sighs and Groans at the approach of Night: the better sort of People retired into the Country.

When the Prepossession was so general, we thought it our best way to hold our tongues. Had we oppos’d it, we had not only been accounted ridiculous Blockheads, but Atheists and Infidels. How was it possible to stand against a Madness of a whole People? Those that believ’d we doubted the Truth of the Fact, came and upbraided us with our Incredulity, and strove to prove that there were such things as Vroucolacasses, by Citations out of the Buckler of Faith, written by F. Richard a Jesuit Missionary. He was a Latin, say they, and consequently you ought to give him credit. We should have got nothing by denying the Justness of the Consequence: it was as good a Comedy to us every Morning, to hear the new Follies committed by this Night-Bird; they charged him with being guilty of the most abominable Sins.

Some Citizens, that were zealous for the Good of the Publick, fancy’d they had been deficient in the most material part of the Ceremony. They were of opinion, that they had been wrong in saying Mass before they had pull’d out the Wretch’s Heart: had we taken this Precaution, quoth they, we had bit the Devil, as sure as a Gun; he would have been hanged before he would ever have come there again: whereas saying Mass first, the cunning Dog fled it for a while, and came back again when the Danger was over.

Notwithstanding these wise Reflections, they remain’d in as much perplexity as they were the first day: they meet night and morning, they debate, they make Processions three days and three nights; they oblige the Papas to fast; you might see them running from House to House, Holy-Water-Brush in hand, sprinkling it all about, and washing the doors with it; nay, they pour’d it into the Mouth of the poor Vroucolacas.

We so often repeated it to the Magistrates of the Town, that in Christendom we should keep the strictest watch a-nights upon such an occasion, to observe what was done; that at last they caught a few Vagabonds, who undoubtedly had a hand in these Disorders: but either they were not the chief Ringleaders, or else they were releas’d too soon. For two days afterwards, to make themselves amends for the Lent they had kept in Prison, they fell foul again upon the Wine-Tubs of those who were such Fools as to leave their Houses empty in the night: so that the People were forc’d to betake themselves again to their Prayers.

One day, as they were hard at this work, after having stuck I know not how many naked Swords over the Grave of this Corpse, which they took up three or four times a day, for any Man’s Whim; an Albaneze that happen’d to be at Mycone, took upon him to say with a Voice of Authority, that it was to the last degree ridiculous to make use of the Swords of Christians in a case like this. Can you not conceive, blind as ye are, says he, that the Handles of these Swords, being made like a Cross, hinders the Devil from coming out of the Body? Why do you not rather take the Turkish Sabres? The Advice of this Learned Man had no effect: the Vroucolacas was incorrigible, and all the Inhabitants were in a strange Consternation; they knew not now what Saint to call upon, when of a sudden with one Voice, as if they had given each other the hint, they fell to bawling out all through the City, that it was intolerable to wait any longer; that the only way left was to burn the Vroucolacas intire; that after so doing, let the Devil lurk in it if he could; that ‘twas better to have recourse to this Extremity, than to have the Island totally deserted: And indeed whole Families began to pack up, in order to retire to Syra or Tinos. The Magistrates therefore order’d the Vroucolacas to be carry’d to the Point of the Island St. George, where they prepar’d a great pile with Pitch and Tar, for fear the Wood, as dry as it was, should not burn fast enough of itself. What they had before left of this miserable Carcass was thrown into this Fire, and consumed presently: ‘twas on the first of January 1701. We saw the Flame as we return’d from Delos: it might justly be call’d a Bonfire of Joy, since after this no more complaints were heard against the Vroucolacas; they said that the Devil had now met with his match, and some Ballads were made to turn him into Ridicule.

All over the Archipelago they are persuaded, that only the Greeks of the Grecian Rite have their Carcasses re-animated by the Devil: the Inhabitants of the Island of Santorini are terribly afraid of these Bulbeggars. Those of Mycone, after their Visions were clearly dispers’d, began to be equally apprehensive of the Prosecutions of the Turks and those of the Bishop of Tinos. Not one Papas would be at St. George when the Body was burnt, for fear the Bishop should exact a Sum of Money of them, for taking up and burning a Corpse without Permission from him. As for the Turks, it is certain that at their next Visit they made the Community of Mycone pay dear for their Cruelty to this poor Rogue, who became in every respect the Abomination and Horror of his Countrymen. After such an Instance of Folly, can we refuse to own that the present Greeks are no great Grecians; and that there is nothing but Ignorance and Superstition among them?